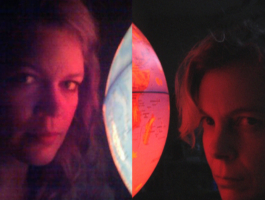 Starting in January 2006 I followed the weblog of a US soldier who was stationed in Baghdad for 6 months at that time.
While searching the internet for harmless pictures from dangerous areas, which I wanted to use for a fake artist documentation, I found a photograph of a date lying on the ground. The caption was "Dates in Baghdad."

So I got into the maelstrom of a person who makes her thoughts and experiences available to the public on the internet almost daily. The discrepancy between her self-perception and what she sees as everyday life in contrast to the brutal, political reality inspired me to start a form of dialogue.

I processed her photos in a video:
Like in a slide show a selection of her pictures are lined up. On the soundtrack there is a simple guitar to which I sing about the soldier. I ask her about her motivation to show me all this and also about her motives to go this way. Most of the pictures show self-portraits, which she took with her camera at arm's length. Her gaze is always directed towards the viewer. A direct invitation.